The bronze medal eluded South Africa’s women’s hockey players for the second successive Commonwealth Games when they lost their play-off for third and fourth 5-2 in Glasgow on Saturday.

In difficult conditions with the rain bucketing down, South Africa, ranked No 11 in the world, went down to No 4-ranked New Zealand although the three-goal margin might have been flattering to the winners, with Marsha Cox’s team in the contest for long periods.

Earlier, the South African men’s team ended their Commonwealth Games on a high when they hammered Canada 7-3 to take fifth place on the table.

Twice South Africa’s women (and men for that fact) came from behind against New Zealand and they were still right in the hunt after goals from Cox – a penalty flick in the 23rd minute – and a cracking effort from Kathleen Taylor (48th minute) had seen things tied up at 2-2.

However, after going ahead 3-2, the Kiwis then netted twice in the last 10 minutes to add some gloss to the scoreline. Not to say they didn’t deserve the victory because they were the better side. But not by three goals, although the stats will show that they had five shots on goal to South Africa’s two.

‘The conditions were terrible and I can’t remember hen we last played in the rain like it was. But it was the same for both teams,’ Cox said afterwards.

‘But the harsh reality is that we were in the game with 15 minutes to go. The difference – as was proven in those last 15 minutes – is that they’re a professional unit and we struggle for financial support. We try to stay positive in the build-up but we only get together as a squad close to these tournaments while the likes of New Zealand are together most of the time. Until things start changing the results like these at the big tournaments will stay the same.’

In the men’s match the 7-3 scoreline doesn’t tell the story of a game in which the South Africans had to twice come from behind and ultimately win in style as the heavens opened over the city.

Lloyd Norris-Jones (2), Tim Drummond, Julian Hykes, Wade Paton, Austin Smith and Rhett Halkett all got on the scoresheet, although it was a second half blitz that turned the match around.

South Africa had started strongly, Norris-Jones having a shot saved as early as the second minute, before Canada forced a series of penalty corners in quick succession. Then play shifted to the other end of the field and Norris-Jones opened the scoring for 1-0. The continued pushing with Smith and Norris-Jones forcing saves from successive penalty corners, but were rocked when Canada equalised after 16 minutes.

Smith and Hykes again had penalty corners saved, but Canada took the lead after 27 minutes before Drummond levelled matters at 2-2 in the 32nd minute.

Shortly after the interval Canada converted from a penalty corner for 3-2, but there was an urgency to South Africa’s play and after a couple of squandered penalty corners Smith scored from one to make it 3-3.

With the rain sending spectators scurrying for cover, Paton put South Africa 4-3 up after scoring from a penalty corner in the 57th minute, but things changed when defender Adam Froese was yellow carded in the 62nd minute. Against 10 men, South Africa took full advantage and Halkett – from a penalty flick – and Hykes started the party before Norris-Jones got his second of the match, and his country’s seventh, with less than three minutes to go. 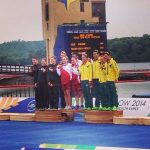