Khotso Mokoena, formerly known as the only South African to win a medal at the 2008 Olympics, showed his big match temperament once again at a drenched Hampden Park in Glasgow on Saturday night when he won Commonwealth Games gold.

A leap of 17.20m in the triple jump on a miserable evening was enough to secure the victory, six years after he had brought home silver from the long jump at Beijing. His winning jump was in his second attempt and almost immediately more heavy rain fell, which suggested that it wasn’t going to be bettered.

And it wasn’t. Silver went to Nigeria’s Tosin Oke (16.84m) and bronze to India’a Arpinder Singh (16.63m). Mokoena’s golden leap was a season’s best for him and it again showed his love of the big stage.

It was also some 51cm better than his previous best for 2014 and only 5cm shy of his own national record.

And it showed his confidence, although some might interpret it differently. For he didn’t have a fifth or sixth attempt, electing to stay warm and dry as the rain pelted down, rightly believing that he couldn’t be caught.

Johan Cronje’s dreams of winning a medal were dashed in the last stride when Nick Willis got his chest in front on the line in the men’s 1500m final. Cronje, who had cruised into the final impressively on Friday night, looked a medallist for 1499m of the race, before he was touched off by the charging New Zealander.

Perhaps there was no surprise in that the blue riband event was won by a Kenyan, James Magut edging out his 18-year-old compatriot Ronald Kwemoi in 3:39.31, with Willis third. Cronje had run a good race, sitting behind the Kenyans Elias Managoi and Magut and Uganda’s Ronald Musagala.

In fact, Cronje did everything right, running hard down the back straight on the final lap and then kicking for home around the bend. He got himself into a clear third but Willis seemed to find another gear in the final 50 metres and ran the South African out of it.

Conditions throughout the evening – no, make that the day – were atrocious as Glasgow showed a different side to that of earlier in the week when blue skies and temperatures in their 20s deg C had shown the face of summer.

This was typical British weather and of the kind that the athletes wouldn’t have enjoyed or been able to produce their best in. However, Mokoena would have been loving it after putting down his early marker.

In the men’s javelin final, Rocco van Rooyen had a best throw of 76.84m for sixth place overall.

The men’s 4x100m was the Usain Bolt show, with the great Jamaican entertaining the crowd before (with a John Travolta ‘Pulp Fiction’ dance routine) during (a blistering final leg) and after (soaking up the atmosphere with his legion of fans).

South Africa’s Akani Simbine flew down the final straight to pull his team through to fourth in 38.35. Jamaica broke the Games record with 37.58, followed by England in 38.02 and Trinidad & Tobago third in 38.10. The South African time was a national record, showing what promise lies ahead. 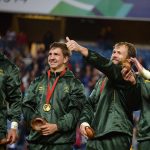 It’s GOLD as SA Sevens side produce the magic

Tokyo looms, again, We don’t know for sure in what shape of form the Olympics and Paralympics will take place in July to September and if anything 2020 taught us to take nothing for granted. What we do know is that if Tokyo 2020 +1 does go ahead, it will do so against a new-found back drop where simply taking… END_OF_DOCUMENT_TOKEN_TO_BE_REPLACED