The Yellow Pages track and field series comes to an end at the Germiston Stadium in Gauteng on Tuesday.

The sixth and final meeting of the series effectively wraps up the local track and field season and now the country’s leading lights turn their sights on the lucrative European circuit.

World 800 metres champion Mbulaeni Mulaudzi, Olympic 3000 metres steeplechase finalist Ruben Ramolefi and Commonwealth javelin champion Sunette Viljoen head the list of stars that will be looking to shine in the final leg with the programme set to start at 5pm.

With last week’s 1500m outing at the Yellow Pages Series meeting in windy Stellenbosch in the back of his mind, Mulaudzi will return to his more conventional 800m distance to prove that the hamstring injury that kept him out of last month’s Yellow Pages SA Senior Track and Field Championships held in Durban and the IAAF World Indoor Championships in Qatar, is a thing of the past.

Ramolefi made the trip to Stellenbosch with every intention of going as close if not faster than his national steeplechase mark of 8 min 11.63 secs, but the infamous Cape south-easter wind put an end to that dream. Expect the Johannesburg-based star to produce a quality run at the Germiston Stadium to prove that classy middle distance times can be clocked ÔÇô albeit it at 1661 metres above altitude.

The ‘Battle of Potchefstroom’ will be held in Germiston this time, when javelin athletes Viljoen and Justine Robbeson go head to head with both having recorded one win over the other in their two top level outings this season.

National 100m champion Simon Magakwe will want to set the record straight after being blown to fourth spot in Stellenbosch on a night when Port Elizabeth’s Leigh Julius took the honours. Don’t write off the challenges from Hannes Dreyer and Snyman Prinsloo either, and if the weather conditions are right a fast time could be on the cards.

If it is points that count, this will be the athlete’s last chance to cash in on the Yellow Pages Athlete of the Meet incentives with R15,000 going to the top male and female based on performances calculated according to the IAAF points tables. 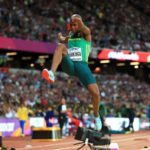 Manyonga and Samaai get gold, bronze for SA

By GARY LEMKE in Tokyo On the third day of staying in the Paralympic village bubble “it” finally dawned on me. “It” wasn’t the sheer visual aspect of the 4 000-plus Paralympians with disabilities all in the same environment of towering 17-storey apartments and surrounded by a 4km perimeter fence. Admittedly, that is the initial and most common conclusion of… END_OF_DOCUMENT_TOKEN_TO_BE_REPLACED