Teenage sprinter Clarence Munyai of Gauteng North stole the show as the ASA Sub-Youth, Youth, Junior and Under-23 Championships came to a close after three days of top-class track and field action in Germiston at the weekend.
Munyai charged to victory in a highly anticipated Junior Men’s 200-metre final, clocking 20.36 seconds to improve his personal best by 0.03sec.
He was well inside the A-qualifying standard of 20.56 for the IAAF World Junior Championships in Bydgoszcz, Poland in July.
Silver medallist Gift Leotlela, who had achieved the required 100m mark with a spectacular 10.21 victory in the short dash final the day before, also equalled the required qualifying mark of 20.56 in the half-lap race to guarantee his place in two events for the global U-20 showpiece.
Munyai and Leotlela, who are coached by Hennie Kriel, were the only athletes to achieve the A-standards in their events at the annual national age group spectacle.
A host of athletes met the B-standard requirements in their respective disciplines, with a total of 36 Youth and Junior competitors achieving the feat on the final day.
This brought the total number of athletes who met the required A or B standards to 45 over the three days of competition, with many of them doing so in more than one event.
One of the grandest highlights of the final day was 14-year-old double amputee Ntando Mahlangu, who had a near-packed Germiston Stadium on its feet as he flew down the home straight to earn the bronze medal in the Sub-Youth Boys’ 400m final, defeating all but two of his able-bodied competitors.
Mahlangu, who had already achieved the A-qualifying standard in the 100m and 200m events for the Paralympic Games at the recent Nedbank National Championships for Physically Disabled in Bloemfontein, set a new world senior best of 50.08 seconds in the T42 class.
While the mark will not affect his official world record of 53.19, as the performance was achieved at an able-bodied event, and there is no 400m race in his class at the Rio Games, the teenage speedster again proved himself as a future star.
‘What a brilliant ending to a well-organised championship,’ said Aleck Skhosana, President of Athletics South Africa.
‘No athlete spared their performance, with the number of those who met the qualifying standards in A and B benchmarks, summarizing what took place over the three days of sheer excitement.
‘We are really proud of the athletes, their managers, coaches and all support staff for the hard work, which finally paid off at this championship,’ said Skhosana. 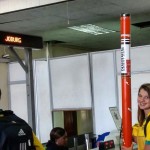 Du Toit leads the way as SA shine in Zambia 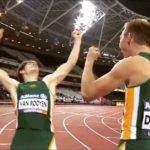 Du Toit on his gold medal dash in London

Tokyo looms, again, We don’t know for sure in what shape of form the Olympics and Paralympics will take place in July to September and if anything 2020 taught us to take nothing for granted. What we do know is that if Tokyo 2020 +1 does go ahead, it will do so against a new-found back drop where simply taking… END_OF_DOCUMENT_TOKEN_TO_BE_REPLACED