Host nation South Africa and Tunisia bagged the lion’s share of the medals on the final day of the ICF Canoe Sprint African Championships at a rainy Shongweni Dam on Sunday, bringing down the curtain on a highly successful continental titles decider and Rio Olympic Games qualifier event.
South Africa grabbed golds in every event the team entered, but with their athletes not eligible for continental Olympic qualification, much attention was focused on the second place on the podium in those key 200m Olympic K1 and K2 qualifiers.
As they did on the second day of the champs, Tunisia showed their experience and class as they swooped to claim the bulk of the Olympic berths, led by their London Olympian Mohammed Ali Mrabet and strong female paddler Afef Ben Ismail.
‘I am really happy to have qualified for the Olympics for a second time,’ said a delighted Mrabet. ‘I am excited to see the standard of racing so high at the African Championships. ‘I hope I can do my country proud in the Olympics,’ he added.
Compatriot Khaled Houssine echoed that sentiment and noted the significance step-up in the C-boat competitive standard.
‘The level of the African athletes has progressed this year,’ said Houssine. ‘I have qualified for my second Olympic Games now, so I have to continue the hard work to get a good result in Rio de Janeiro,’ said the C1 star.
Tunisia made it a clean sweep of the Olympic berths on offer by winning both individual C boat class finals, with Khaled Houssine taking the men’s C1 African title and berth in the Rio showcase, while Nedra Trabelsi took the women’s equivalent.
London Olympic medallist Bridgitte Hartley used the event as part of her build-up to the Rio Games, and showed unflappable glimpses of her impressive current form as she added a trio of continental sprint titles to her CV.
‘I am enjoying racing again,’ said Hartley. ‘It can be a bit of a shock to do your first race at the first World Cups whereas countries like Australia and New Zealand always get to race each other throughout the season,’ said Hartley.
‘But I don’t want to get too fast too soon either, so I am enjoying just focusing on counting my strokes and learning how to race so that I am prepared for the World Cups which start in two months time.’ she said.
She added that the elevation of the overall standard of paddling in Africa was exciting to witness. ‘To be at this event and see so many athletes and those close races is awesome,’ said Hartley.
‘The close racing comes when athletes work on their technique and conditioning and start to make the step up, which you can see here,’ she added.
With a record number of African countries taking part, it was heartening to see the emergence of seriously competitive talent from nations such as Sao Tome and Principe, Mozambique challenging the more established nations like Tunisia, Nigeria, Senegal, Cote d’Iviore and Egypt. 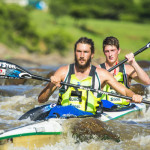 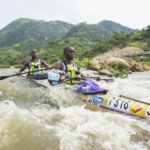