A small team of South Africans were part of the opening ceremony for the 23rd Deaflympic Games in Samsun, Turkey, on Wednesday night.

Veteran Paralympian swimmer Tadgh Slattery is chef de mission for the compact team, which will fly the flag for the rainbow nation in the Deaflympic Games, ending on 30 July.

‘Last night’s opening ceremony was brilliant, unbelievable,’ he enthused. ‘The stadium was full and there were great cheers and clapping for us and all of the 85 countries.

‘More than 4000 athletes from around the world were here and we were so proud of our swimmer Cornell Loubser as he carried the flag for us.’

Loubser won two silver medals and a bronze at the World Deaf Swimming Championships in Texas, US, two years ago.

The official delegate is Julius Maxajwe, Slattery is chef de mission, while the swimming manager is Vionne Skinner.

Three swimmers will do duty – Loubser and Mark Roach are competing for the second time, while Pierre Dellieu is a debutant. Only one track runner will be in action, 100 and 200m sprinter Simon Jiyane.

The Deaflympics were first held in Paris, France, in 1926 and is held every four years. 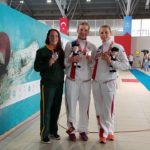 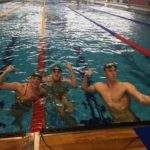 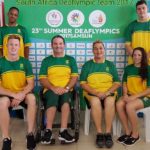