Every time Prudence Sekgodiso steps on to the track to race, she has one goal and that is to win.

Sekgodiso’s positive approach has led her to dominate local U18 800m races.

Although she might have been beaten once on the track, she is equally as ruthless in cross country races.

It is for this reason that the Grade 10 pupil has been selected to represent South Africa at the 2018 Youth Olympic Games in Buenos Aires, Argentina from 6-18 October.

A definite highlight for her was winning the 800m at the South African Junior and Youth Championships. Sekgodiso’s breakthrough race was in March when she competed at the Liquid Telecom Grand Prix Meeting in Roodepoort, where she raced against the likes of Caster Semenya and managed to finish fifth in 2min 06.96sec.

Semenya (1:54.25) and Gina Lofstrand are the only two local 800m athletes to have run faster times this season.

Even though the TuksSport High School athlete won a bronze medal at the African Youth Games in Algiers, she’s honest about her performance at the race.

‘It was not a good race. My time was certainly nothing to get excited about. Running two minutes 10 seconds is bad,’ said Sekgodiso promising to be faster at the Games. ‘I think I am capable of at least running 2:04.’

If Sekgodiso does this, she could end up being one of the top eight 800m athletes at the Games. So far this season, only eight youth athletes in the world have managed to dip under 2:05.

Twin sisters and Sekgodiso’s regular training partners, Thobile and Thulisile Amon, confidently predict that she will run the time she is aiming for.

‘We might be in Grade 12, but Prudence is our role model. It’s inspiring to train with her and watch her race,’ said Thobile.

The twins couldn’t help but complete each other’s sentences when praising Sekgodiso’s performance.

‘Nothing seems to faze Prudence. She’s never one to wonder what could have been. When she has a bad race, she immediately puts it behind her. All that matters is that she has to do better next time,’ said Thulisile.

Thobile  hastily added that Sekgodiso does not allow herself to be intimidated.

‘We have witnessed and heard some athletes make bold predictions before a race, regarding the times they intend to run. Prudence will just listen and say nothing. It’s as if she says, “let’s go race and see if you can do what you’re saying you are going to do.” And then she outruns them.’

Jobodwana quick off the mark in US sprints 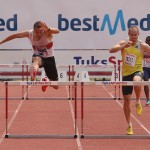