Our world junior cruiserweight BMX champion, Teagan O’Keeffe had first hand experience of the course to be used at next year’s Olympic Games in London when she lined up for the test event at the weekend, writes Mark Etheridge.

And the good news is that she came away filled with confidence after her weekend efforts.

O’Keeffe, who hails from KwaZulu-Natal, is based at the World Cycling Centre (WCC) in Aigle, Switzerland, along wit her coach Thomas Allier.

Speaking to Road to London 2012, O’Keeffe shared her thoughts on the London lay-out. “The track looked really good, much better than the previous Supercross track in Papendal. For the first time the girls had an exciting track, much better than the guys track ÔÇô the first straight was really hard, A lot of the girls had problems with it and on top of if all we had only one practice session on it due to the rain. ┬áIt had an exciting and crazy second straight with the inclusion of the ‘tunnel’.

“When we first got there, we were all puzzled how we were going to do it but it ended up being really easy, fun and fast.”

First up for O’Keeffe was the time trial. “Because we had had such a little practice, my coach, Thomas worked hard with me and encouraged me to get my mind right. I put in such a perfect lap that I qualified in fifth place overall ÔÇô my best ever result.”

That result took her through to the Super Final which had good and bad news for her. “Because I had qualified in the top 16 of the ladies I went through to the super final ÔÇô which is a medal event of its own. I recorded the fastest time down the start hill but then the wind took me and pushed me into the men’s straight which meant I would get an automatic DNF [did not finish] ÔÇô even though I knew I would ┬áDNF I didn’t give up and completed my lap perfectly.”

Next was race day which brought another element into the equation ÔÇô the weather, which played havoc. “The wind was howling, rain was pouring so we had a riders meeting to decide if we wanted to race because the conditions were not going to be safe. Nobody wanted to race but then then blue skies prevailed, the wind backed off and they managed to fix up the track.

“Due to the rain delays, they only ran one Moto instead of the usual three for qualification into the semi. I had a good lap and made it through to the semi. In the semi-final, I had the worst gate pick which made racing the first straight really difficult and I ended up getting squeezed out and wasn’t able to jump the third jump ÔÇô I finished up sixth in the semi final which is my best result to date.”

So O’Keeffe was all smiles on the way back to her Swiss base this week. “I was really so happy with my racing and my coach was also so proud of me and congratulating me. He also told me that this is just the beginning.” 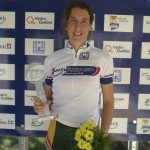 Ashleigh, Monique are queens of the continent

Tokyo looms, again, We don’t know for sure in what shape of form the Olympics and Paralympics will take place in July to September and if anything 2020 taught us to take nothing for granted. What we do know is that if Tokyo 2020 +1 does go ahead, it will do so against a new-found back drop where simply taking… END_OF_DOCUMENT_TOKEN_TO_BE_REPLACED