Day one of the IPT at the university’s impressive hockey centre saw Southerns open their account with a solid 4-0 win against North West, who were not at their best.

But Western Province were arguably more impressive in thumping Eastern Province 8-0 while KZN Coastal Raiders were good value for their 5-0 win against a spirited Witwatersrand.

Raiders coach Lennie Botha said that as soon as his team began to play to their strengths they looked good. ÔÇ£Our structure was sound in the first half and the 3-0 cushion at half-time meant we were able to rotate the players on the substitutes’ bench nicely in the second half and save some of the players’ legs.

Defender Catherine Morris was excellent for the Raiders while captain Cindy Botha took pressure off her fellow frontrunners and Kerry Pearton was another outstanding performer.

Raiders will certainly need every ounce of effort if they hope to beat WP on Wednesday.

The return of Kate Woods after a year away has added huge value to the WP side and head coach Wayne Denne was full of praise for a key player. ÔÇ£Kate is a natural leader and she commands respect from her team-mates who feed off that leadership,ÔÇØ Denne said.

The dynamic WP midfield was in imperious form and Jade Mayne was just one player who caught the eye. ÔÇ£Western Province are a very good team and our disciplines will have to be 100% against them,ÔÇØ said Botha. ÔÇ£We are the definite underdogs but I think it is going to be a very good game.ÔÇØ

And in the late game A Section newcomers Free State put in a good performance in front of their loyal supporters who braved the icy weather but to went down 1-0 Northern Gauteng Blues.

The Blues were good value for their 1-0 half-time lead win in the first half but in the second period the Bloemfontein girls were unlucky on numerous occasions.

In the B Section Amathole gave notice that they are favourites for the promotion to next year’s elite A Section with a solid 4-0 win over SA Country Districts A. Coach Greg Beling’s side moved the ball with pace and accuracy all around the pitch. KZN Mynahs or KZN Inland could well meet the East London side in Saturday’s final. 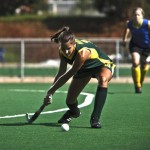 Disappointing start as SA crash to Ireland in opening match

By GARY LEMKE in Tokyo On the third day of staying in the Paralympic village bubble “it” finally dawned on me. “It” wasn’t the sheer visual aspect of the 4 000-plus Paralympians with disabilities all in the same environment of towering 17-storey apartments and surrounded by a 4km perimeter fence. Admittedly, that is the initial and most common conclusion of… END_OF_DOCUMENT_TOKEN_TO_BE_REPLACED