Nine contestants, five medals… that was the story of our junior sprint kayakers at the Ruhr Regatta in Germany on Sunday.

Among those medals were three silvers and the experience gained from going up against international competition will be invaluable when they are joined by the full national junior squad for Junior World Championships in Moscow at the end of next month.

The beautiful Kemnader Lake outside Bochum hosted sprinters from 14 different countries, as well as a number of local German clubs, and the standard of racing was a big step up from the local scene for most of the South Africans. However the team rose to the occasion and coach Attila Adrovicz will be delighted with their performances.

Cape Town’s Melanie van Niekerk consistently produced results over the three days, highlighted by a second place in the K1 1000m in the Under-16 age category early Sunday morning. The Jan van Riebeeck High pupil was pipped to the post by Polish youngster Joanna Bruska, but it was just the start the team needed to the day. With her confidence up, she later raced in the Under-18 K1 500m – an age group above her usual.

A sixth place in a fast race was no mean feat, and just half an hour later she was back on the water for the Under-16 K1 500m Final. Having won bronze in this event last year, Van Niekerk was hoping to medal again, and didn’t disappoint. Bruska again set the pace with the South African finishing less than three seconds behind in third, and capping off a successful weekend for the solitary female in the team.

The determined Under-23 K2 partnership of Cam Schoeman and Stu Waterworth also netted a double medal haul, finishing strongest in the 500m Final. With the French crew in good form, the pair managed to squeeze out the German boat for the silver medal position. Earlier in the day, Schoeman and Waterworth raced in a tough 1000m Final, surging to the bronze medal behind the French and New Zealand combinations. The KwaZulu-Natal duo has been in Europe since late May, and racing in two senior World Cups obviously helped them immensely.

The Under-16 crew of Blaine Beresford and Ruan Knobel capped off the squad’s medal celebrations by winning silver in the K2 500m event on Sunday afternoon. The pair had a tough battle with the young Polish boat, losing out on the line but still finishing over six seconds ahead of the third-placed Irish combination.

Considering the class of the competition, simply qualifying for a Final is an achievement, and Canoeing South Africa will be pleased to see that all nine representatives did exactly that. Gregor Martin and Frans Smit placed fifth in the Under-18 K2 500m, while Adam Lapacz was seventh in the U16 K1 1000m. The U16 K1 500m Final had two South Africans on the start line, with Blaine Beresford finishing in eighth position and Dewalt Hattingh in 10th. 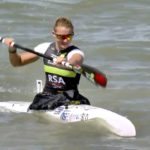 Back to the drawing board, but Van Tonder will bounce back

Hartley back after Cups

Tokyo looms, again, We don’t know for sure in what shape of form the Olympics and Paralympics will take place in July to September and if anything 2020 taught us to take nothing for granted. What we do know is that if Tokyo 2020 +1 does go ahead, it will do so against a new-found back drop where simply taking… END_OF_DOCUMENT_TOKEN_TO_BE_REPLACED