Team South Africa’s Rio Olympic and Paralympic teams enjoyed a gala farewell dinner in Gauteng on Friday evening.
Members of both teams were wished well by a host of Very Important People ahead of the Olympics which officially open on 5 August and the Paralympics on 7 September.
Former Robben Island prisoner and political activist Ahmed Kathrada reminded teams of the privilege they now enjoyed.
‘The most deprivation in jail is the freedom of speech although on Robben Island there were still leagues of rugby, soccer, tennis and volleyball..
‘The greatest unifying factor is sport. On the sporting field communities and languages and united in a winning cause.
‘May our Olympic and Paralympic teams celebrate success and victory after victory.’
Adding inspiration was SASCOC President Gideon Sam. ‘Support lifts a team to perform. Just imagine Wayde van Niekerk, Chad le Clos and Hilton Langenhoven being able to look up into the stands and seeing South African support with huge SA flags etc. In Rio no SA athlete should be without support.
‘Our South African athletes mustn’t be drops in Rio they must be an ocean.
‘Thanks also to the parents, boyfriends, uncles and aunts behind the athletes. It’s a long journey to get this point.
‘Let us be unstoppable in Rio and remember whenever our sports perform, the nation is happy. Go to Rio knowing that people are behind you and love you. Whether it’s on TV or radio or social media, we we will be following you.’
Also at the send-off the two South African Olympic and Paralympic flag bearers were announced. World 400m athletics champion Wayde van Niekerk will carry the national flag at the Olympic opening ceremony while Zanele Situ will do the duty at the Paralympics.
Van Niekerk was not at the send-off due to international duties but a proud five-time Paralympian Situ was.
Pictured here with a proud coach, Karin le Roux she told Road to Rio 2016: ‘This is such a big thing for me. To be given this honour in front of the whole team.
‘It honestly hasn’t really sunk in yet, and will probably take a few days. What a great honour. My 10-year-old daughter Azamazi will definitely have something to tell her friends at school now.’ 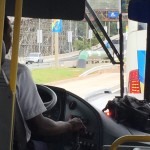 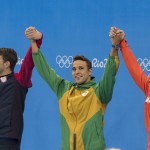 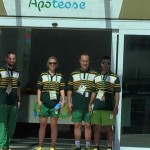