Our tumbling gymnast Karen Wilson is officially ranked third in the world!

This is after the recent FIG World Cup trampoline and tumbling competition in Salzgitter, Germany.

Featuring 181 trampolinists and tumblers from 26 countries, the event was a sequel to the recent World Cups in Belgium and Poland.

As the last World Cup in 2009 it crowned the winners of the overall series. The ultimate victory is based on each gymnast’s four best World Cup results.

Karen and teammate Bianca Budler took fourth and seventh respectively at the event.

Karen who turns 21 next month performed exceptionally well against seasoned athletes from Russia and the Ukraine.

Her consistency throughout the series reveals her calibre as a world class tumbling athlete. She has also shown that she has the potential to reach the top of the FIG tumbling rankings. Following this series she retains this ranking till the next major competition.

The two gymnasts now focus on the highlight of the season, the 26th World Championships and 19th World Age Group Competitions coming up in November in St Petersburg, Russia. 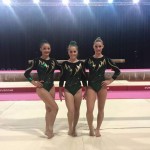 Cummins is the pick of SA gymnastics trio in Scotland 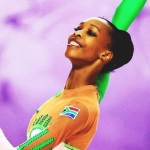