Palpably podium material, young Zoonekynd had a disastrous first pass in the final of the double mini-trampoline in the gymnastics competition.

Despite a fine routine, judges ruled that she had failed to complete the full move on dismount and scored her a dismal 22.600.

Only one of her seven fellow gymnasts had a poorer score and that left her a yawning 11.600 behind first round leader Corissa Boychuk of Canada.

Despite a fine comeback in her second pass where she nailed a 33.400 mark, her dreams of a podium at least and gold at best, had turned into a nightmare.

Zoonekynd had gone into the finals as the second best qualifier.

Making the experience all the more savoury was the fact that the judging panel failed to allow an official appeal against her first mark, saying that her hand had touched the trampoline before she had completed her move, despite video evidence to the contrary.

That meant that she was not judged on any degree of difficulty and it crippled her score by at least 10 points.

“Sure, she messed up her move,” said a frustrated mom and coach, Mandy afterwards.

“That we’ll accept but definitely not to the extent as reflected by the score. That was 10 points just blown away. Her routines are normally so safe that this is just completely unexpected.”

A clearly distraught Zoonekynd apologised for letting down everyone who had been following her perfromance.

But such are the vagaries of international sport. Now the young 21-year-old will have gone to sleep with an unsavoury taste in her mouth and dreams of what could have been but she can rest assured that she gave nothing but her best for her country. 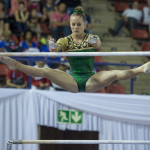 Bianca masters the bars for sixth spot in Doha 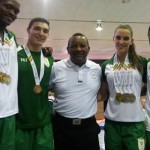 Mass turn-out of stars at Games in Gauteng

By GARY LEMKE in Tokyo On the third day of staying in the Paralympic village bubble “it” finally dawned on me. “It” wasn’t the sheer visual aspect of the 4 000-plus Paralympians with disabilities all in the same environment of towering 17-storey apartments and surrounded by a 4km perimeter fence. Admittedly, that is the initial and most common conclusion of… END_OF_DOCUMENT_TOKEN_TO_BE_REPLACED